Note: This article has been compiled from several sources that are linked throughout the text. Click on the numbers in square brackets to consult them!

From the Club Català de Naturisme (CCN) and from the group of Young Naturists, meetings are organized from time to time to clean natural spaces, generally of nudist tradition, with the aim of maintaining the good health of ecosystems and raising awareness of the amount of waste that is dumped uncontrollably on beaches, rivers and forests.

These activities offer, through the practice of social nudity, a good opportunity to raise awareness and fully participate in the ecological branch of naturism.

ENVIRONMENTAL ISSUES AND THE OBJECTIVES OF CLEANING ACTIVITIES

There is no doubt that waste of human origin in nature is a serious problem, especially because of the damage it causes to ecosystems. Humanity has managed to develop materials that have proved very useful, such as plastics, but their long durability can also play against us.

If, for example, a bag of potato chips is lost in nature, its inability to biodegrade will cause it to eventually end up in the sea, where it will wear out and crumble into small pieces. These small pieces of plastic (less than 5 mm, but which can become microscopic) are called secondary microplastics and are very dangerous because, along with the other millions of tons of microplastics that are estimated to exist in the planet’s oceans, [1] they compromise the health of many ecosystems when they are absorbed by the food chains of marine animals. The real impact and damage they can cause is still unknown, but several studies have shown that, for example, microplastics can already be found in our digestive system and even in our bloodstream; [2][3][4] and also that, in the sea, plastics and microplastics act as vectors of dispersion, capable of transporting colonies of microorganisms along thousands of kilometers to penetrate other marine ecosystems that can be altered for not being adapted to the presence of these species. [5][6]

What we know for sure is that the task of cleaning all the seas of waste and microplastics presents an immense technical difficulty, and is almost unthinkable with current technology. Therefore, for the time being, it is preferable to prevent the bag of potato chips from ending up in nature before having to deal, once it has broken up, with the scattering of microscopic fragments.

Apart from the problem of microplastics in the oceans, there are many others caused by the presence of waste in nature: the death of birds, fish and cetaceans by ingestion of waste, sea turtles that confuse the bags of plastic with jellyfish [7], the risk of fires caused by glass bottles in the forest – which act as a magnifying glass that concentrates the sun’s rays in summer -, the waste that accumulates on the seabed and creates real landfills under the sea which prevent the development of communities on the natural substrate… [8] 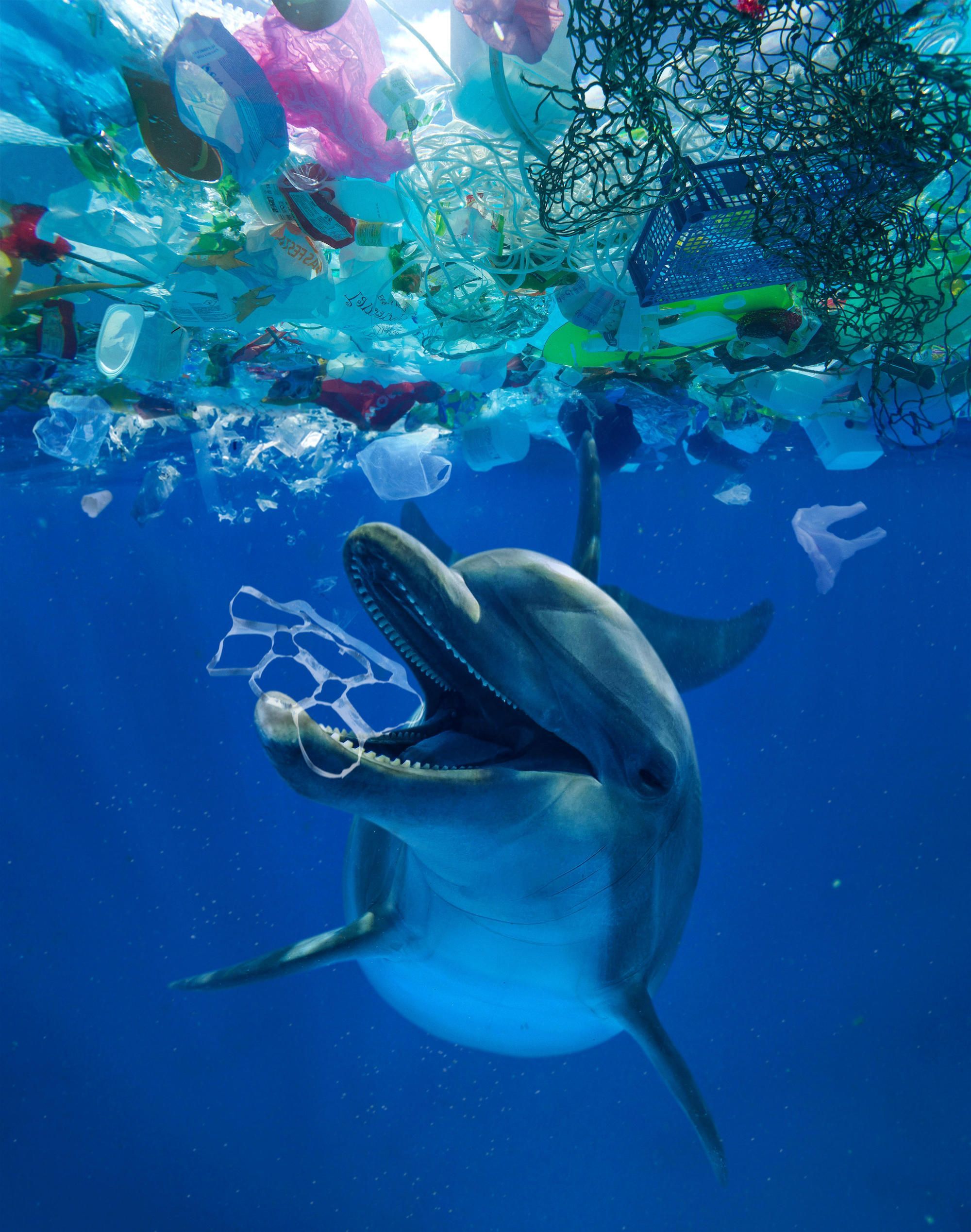 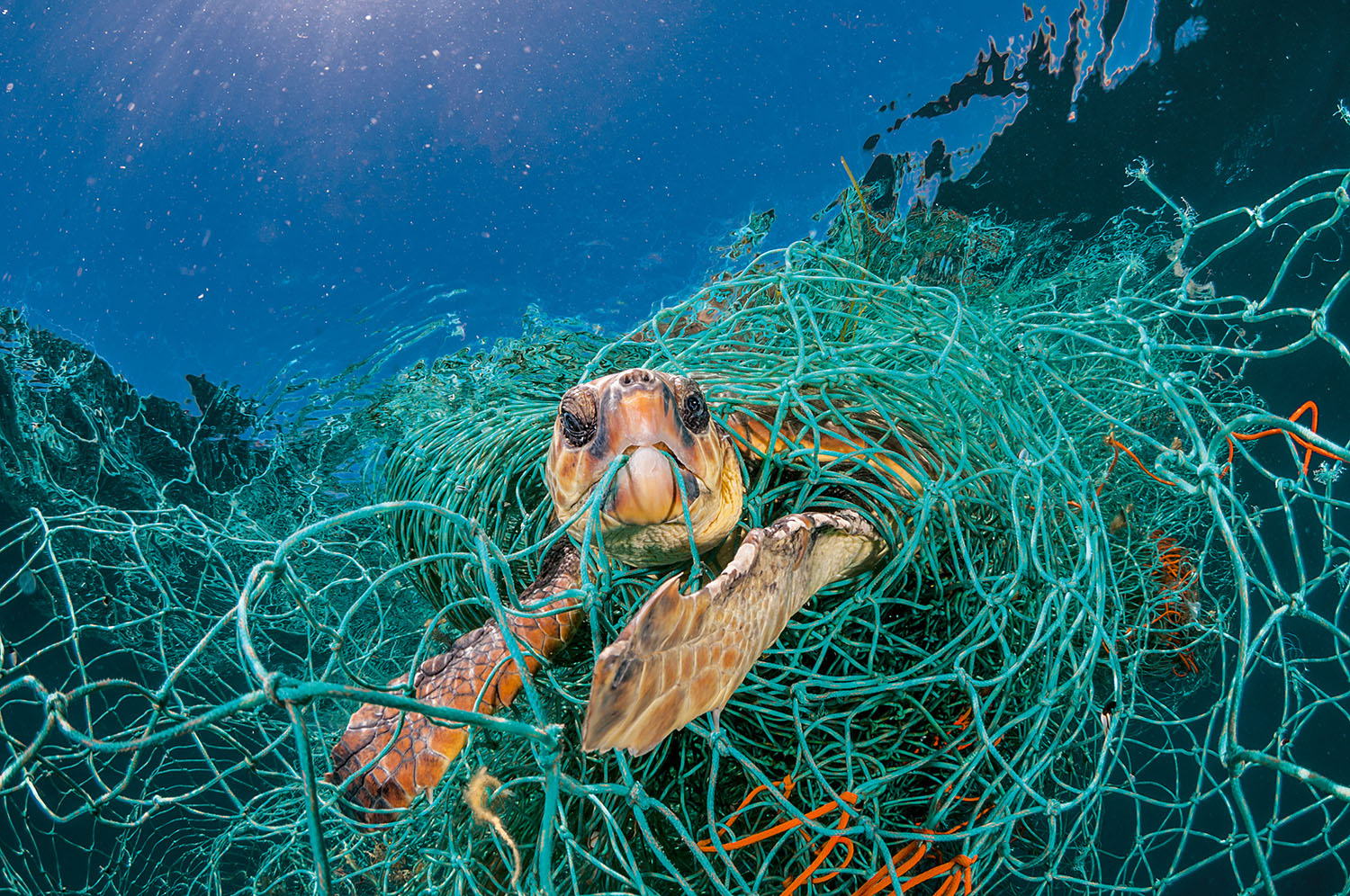 Two samples of the impact of water pollution on animals: on the right, a dolphin swimming under a garbage island; on the left, a masked turtle trapped in an old fishing net in the Mediterranean Sea (source: National Geographic – 1, 2)

Seeing this pile of problems, it is inevitable that we ask ourselves: can a cleaning activity like the ones we organize really have any tangible effect? Clearly, our calls do not have the effect of a magic wand that solves everything instantly, in part because the problem has not a single cause, but many, and most do not depend solely on individual actions. To prevent this problem from worsening, action can be taken in many ways: drastically reducing single-use plastics for both consumers and manufacturers, requiring more efficient recycling systems and protocols – as only 10% of world plastic is recycled, and of this 10% only a fifth is recycled properly [9] -, or calling for greater international collaboration and involvement with the promotion of new laws that guarantee responsible waste management by companies.

Our cleaning activities, such as the Catalan Nudist Beaches Cleaning Day, have a triple purpose. First, to involve and bring naturists closer to the problem of waste so that we become aware of this reality. Second, to contribute to the good health of ecosystems through the direct removal of waste from where it should not be, thus reducing our impact on nature; a practice that takes on special importance if we take into account that many areas of nudist tradition do not have a cleaning service (for example the most pristine beaches), and the waste that accumulates there remains there until someone collects it or until it is carried away by the sea. Finally, these coordinated actions help to keep a record of the waste that is usually found in a natural environment and make it possible to identify how has it ended up there. This is useful for detecting which issues affect a given space.

A CONCRETE EXAMPLE: THE CLEANING OF THE ROCA PLANA BEACH (TARRAGONA)

To give an example of the latest point, we can talk about the case of the Roca Plana beach, on the Costa Daurada, which some members of Young Naturists helped clean up during the last Catalan Nudist Beaches Cleaning Day, in September 2020. We were able to identify several problems. 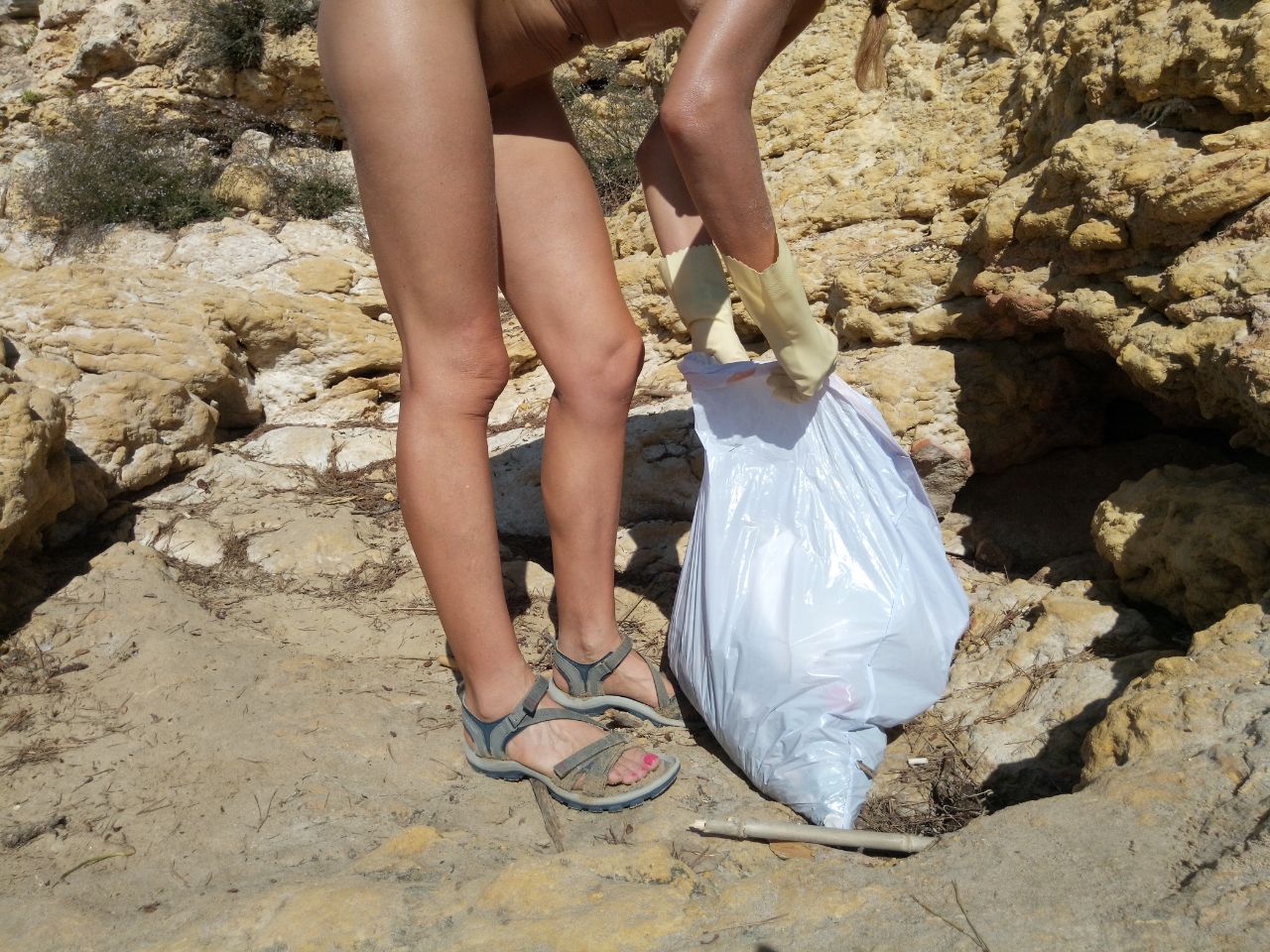 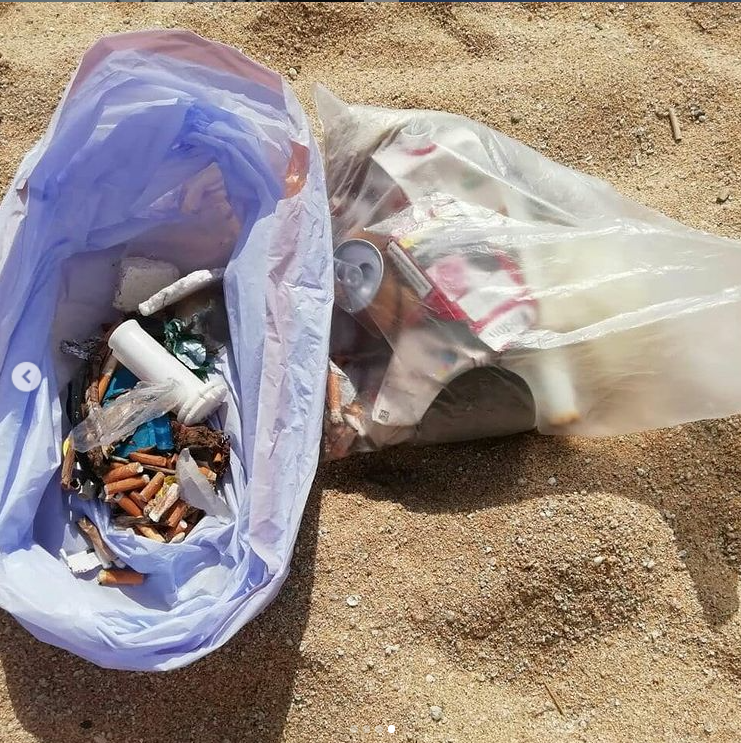 Images of the Catalan Nudist Beaches Cleaning Day of 2019, on the Roca Plana beach.

First of all, one related to incivility: apart from the usual stubs that we find on so many beaches (which release pollutants during their decomposition process), we also detected that, around the beach, both in the piece of adjacent forest as in the rockeries of the sides, there were numerous debris resulting from gatherings of friends, encampments, snacks, etc.; it was rubbish that was not usually visible to the naked eye, but was half-hidden: cans, water bottles, bags of chips or glass bottles hidden in the cracks between the rocks or in the bushes, which had been used as trash bins.

Another category of waste was that which had been dragged by the sea. It is common for the sea to cover a large part of the Roca Plana beach during autumn and winter storms and to deposit waste there, [10] which is accumulated in the back area; it mainly includes very diverse plastic elements: packaging, pieces of Porexpan, fragments of nets… We also found rubbish related to rod fishing from the rock formations: numerous fragments of fishing line and some rusty hooks.

Finally, we must also mention one of the most worrying problems, that of pellets, which are small spheres of plastic (specifically polypropylene) of about five millimeters widely used in industry as a raw material for the manufacture of very diverse objects. Pellets reach the sea through leaks or spills, a recurring problem that has been affecting the Tarragona coast since the 1960s – when the petrochemical industries were established – and in many beaches they can be seen in large amounts (up to tens of millions on a single beach!). [11][12] It is a serious problem because many species of fish confuse these plastic balls with food, and being microplastics, they are especially difficult to clean. 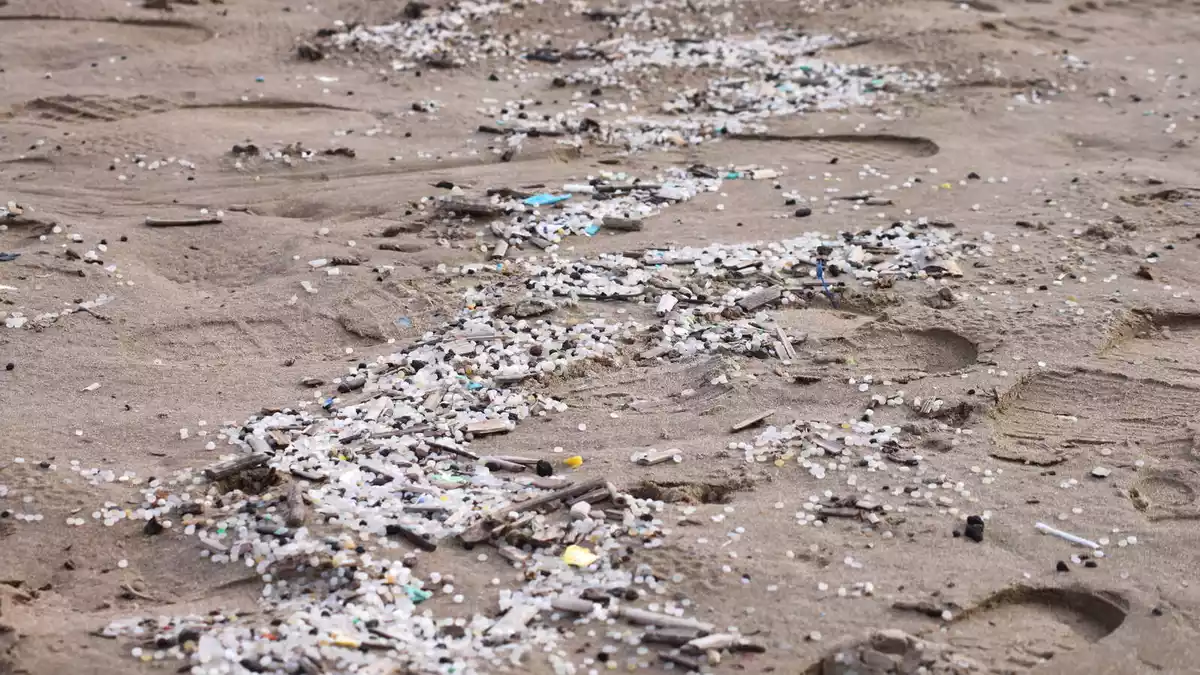 In short, it is worth mentioning that in our cleaning activities we not only clean, but we also end up learning a lot about the problem of waste in the environment, which helps us become more aware of it.

WHEN AND WHERE ARE BEACH CLEANINGS ORGANIZED?

Natural spaces cleaning activities are usually scheduled throughout the year, so it is advisable to stay tuned to the section where the activities are published on the CCN and Young Naturists websites. However, since they are outdoor nudist activities, they mostly take place during the warmer months, more appropriate for being naked outdoors.

The most important event of this kind is the early mentioned Catalan Nudist Beaches Cleaning Day, which the Club Català de Naturisme has been organizing every September for some years. This day, which is part of the Let’s clean up Europe campaign, takes place on many beaches of nudist tradition simultaneously (which can be consulted in a list published previously), each of which has a volunteer assigned to it, responsible for coordinating participants. As with other unlocalized activities organized by the CCN, such as the World Naturism Day, from the group of Young Naturists it is usual that we choose one of the beaches to go together and thus encourage other young people to participate in them and, if they have not already done so, establish their first contact with our group. 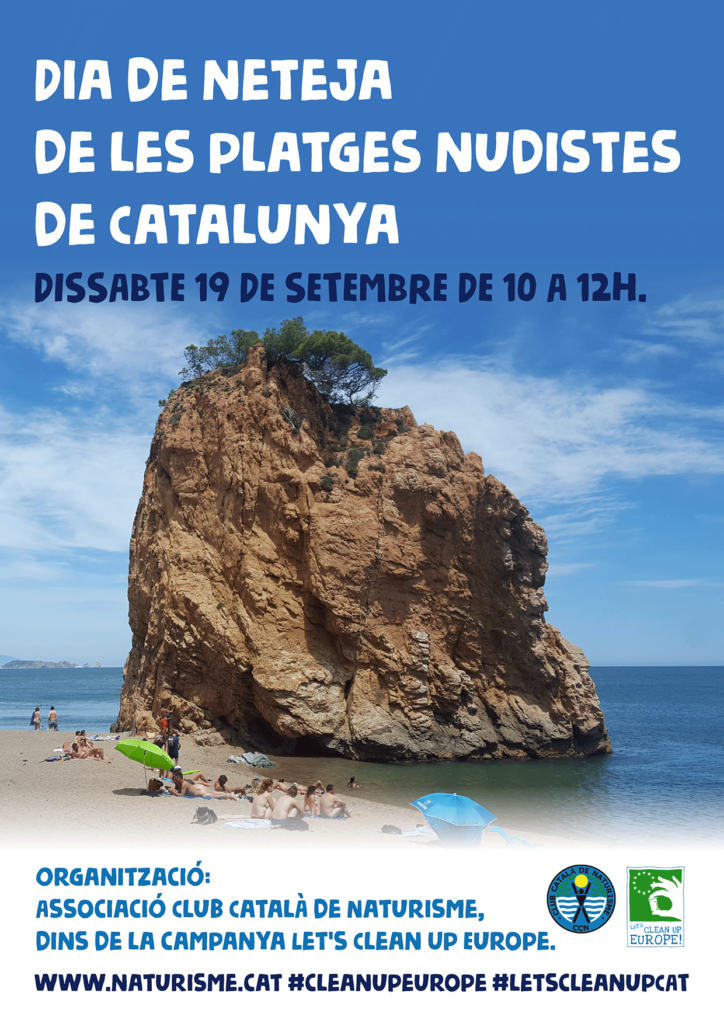 It is worth noting that so far most of the cleaning activities have been organized on beaches, but it is possible that in the future some will be scheduled in other environments, such as forests or rivers. In any case, remember that if you have a proposal for such an activity (or any other), we are very happy to hear it!

WHAT SHOULD BE TAKEN INTO ACCOUNT WHEN PARTICIPATING IN A CLEANING ACTIVITY?

When participating in a natural environment cleaning activity you need to keep a few things in mind to ensure that it will be a success and that there will be no unforeseen events. We will explain them briefly to you!

Now that you know everything you need, we encourage you to come to the next beach cleaning activity! See you soon 🙂